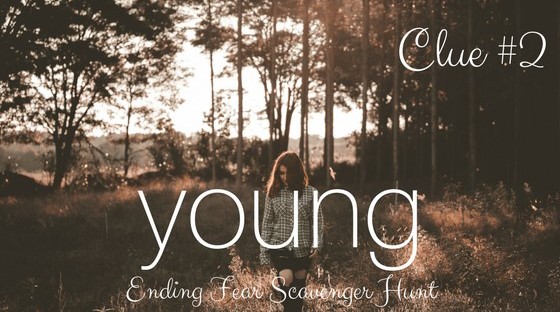 This question will determine your future career as an author:

Yes or No: Pineapples on Pizza?

Yes. There is no other way.

So, Deanna, the title of your book, Ending Fear, it’s more than meets the eye, right? How did you come up with it?

The book is about a girl named Fear, and yes, she is afraid. It does have the double meaning of course, so I thought it was a bit clever. Probably not that clever. But I tried.

Since this name relates to a character, are you giving us a major spoiler right upfront?

Well, you will have to read the book to find that out because SPOILERS SUCK!

Lots of authors go through an agent, then the agent gets them a publisher. You seemed to skip right over that. How did you get so amazing?

No amazingness to behold. I did have two agents interested, but I got the publishing contract offered through a small publisher called Love2ReadLove2Write, so I took that rather than going through an agent. I figured, okay, one is going to take years possibly to get my book published and then they take some of my money, or I can get it published now and keep all my money. The decision was fairly simple. I get how rare my situation is. I can only point to the Big Man Upstairs on that one.

Revisions. Those must have happened, right? How different is the final product than the original?

Well, it’s the same story essentially. I haven’t had to do anything drastic like change the plot or alter the storyline. Nor did I have to get rid of any characters or anything like that. But the edits.

OH MAN, those edits. Lots and lots and lots of editing. So while the story has been added to, it’s essentially the same story, just much better fleshed out and worded much better. That took a lot of learning, researching, and effort.

I know you were able to see Ending Fear in its earlier stages as my FASTEST beta reader! (Thanks again for that, BTW) But I think you’ll be pleasantly surprised with how it turned out in its polished, final stage. At least I hope you will.

Do you have a private office for writing with a bunch of bookshelves and a ladder on wheels? Or do you write somewhere not as cool?

Definitely not as cool. I write mainly at my kitchen table. Yeah. No massive bookshelves and definitely no ladders on wheels. Only in my dreams. Sigh. Now I need to go watch Beauty and the Beast.

How much input do you get for the front and back cover? Did you patrol the streets and find some random girl and say “Her, that’s Fear!” and corner her for a picture?

Ha! That’s awesome. Nope. I wish I could have found someone off the streets. Imagine the person’s surprise at being randomly offered the spot on front cover of a book!

My publisher and my cover artist Sara Helwe actually did most of it. But I did get to help with opinions. Mainly, “Yes,” “No,” or “I don’t know” type input.

There was one funny situation where I swear Fear had a little pimple on her face and I kept telling my publisher and cover designer and they couldn’t see it on their copies of the picture. But for some reason when the picture went through Facebook Messenger to me it messed up the pixels enough that there was one spot where she had a “blemish.” Luckily the zit didn’t end up on the front cover. J

Amazon’s page is teasing readers with “Book One of the Gliding Lands.” Does this mean Books 2 and 3 (Or 7 for Potter style) are already in the works? (Or have a draft or two done?)

I have the second book done but not polished. The next few months will be devoted to polishing it up. And then, book three will get drafted after (or possibly during) that. I honestly already have about 50 pages done of the third book as well. But the second book needs about 50 more pages, so maybe I should just shove all that third book stuff into the second? Huh? What do you think?

Does it feel nice to respond to skeptical Downers with “Yes, I write actual books” as your job?

Hehehe. I see what you did there.

Honestly haven’t run into many Downers who’ve said that to me. Probably because I was a SAHM for so long and didn’t have a job. So now, people are just like, “Oh, you’re writing? That’s so cute!” Yeah…maybe someday we writers will get someone to take us seriously.

When you aren’t writing, do you prefer reading books or doing Mensa Brainteasers?

*Looks up Mensa Brainteasers* Oh. Nope. No high-IQ over here.

Book reading is always pretty important to a writer, I’d say. But honestly I prefer having tea with chimps. It’s just more fun all around.

Do you regularly do work in an Adult Onesy?

All. The. Time. How did you know? *Checks for hidden cameras around the house.*

How does it feel to be doing what you love?

They say once you start getting paid for doing what you love it loses its magic. I just don’t see that happening with writing. It’s something once you start becomes a huge part of who you are. To stop now would be like ripping a giant piece out of my heart. And that would sting. Quite a bit.

Thanks for the interview, it was so awesome to be a part of your blog! Truly appreciate you giving me the opportunity.

Doing the scavenger hunt? Don’t miss the next step from Liv K Fisher!

Be sure to pick up your copy of Ending Fear on July 18th on Amazon! https://www.amazon.com/dp/B073G8Y5MZ/ref=dp-kindle-redirect?_encoding=UTF8&btkr=1

11 thoughts on “Interview with Deanna Fugett, Author of Ending Fear”